The revolvers of the U.S. armed forces have always been under appreciated by collectors, the good news is that makes them relatively inexpensive to acquire, but this is changing. At a recent trip to the 2003 Louisville gun show I noticed prices on Victory revolvers had increased noticeably. That being said you might want to consider adding a few Victory models to your USGI collection.

While the information I provide below can be helpful please see the list on the bottom of this page for reference material you should have if you are going to collect these historical pieces . The Victory model revolvers participated in various roles from guard duty to riding in a shoulder holster with fighter and bomber pilots. I have talked to many ex-military personnel that carried them as late as the 1980s, as you can see these pistols played a significant part of our history. To this day the Victory model is a very enjoyable shooting collectible, mainly due to its inexpensive cost, light recoil, and good accuracy.
Enjoy and happy collecting, Ty

The Victory model was so named for the 'V' prefix which was placed before the serial number and represented 'Victory' against the Axis powers in World War II.

Serial numbers for the .38 special Victory model began at about V1 in early 1942 and ran until VS811119 with a date of late August of 1945 (end of production). V1 to approximately V39,999 were predominately .38 S&W Caliber (I have observed revolvers in the 1-40000 range in .38 special caliber). Serial numbers are located on Inside right grip, frame butt, Cylinder, extractor star, and bottom of barrel. Crane and crane recess are also serial numbered to each other, but this is a different number then the revolvers serial number as is correct for Victory model revolvers. 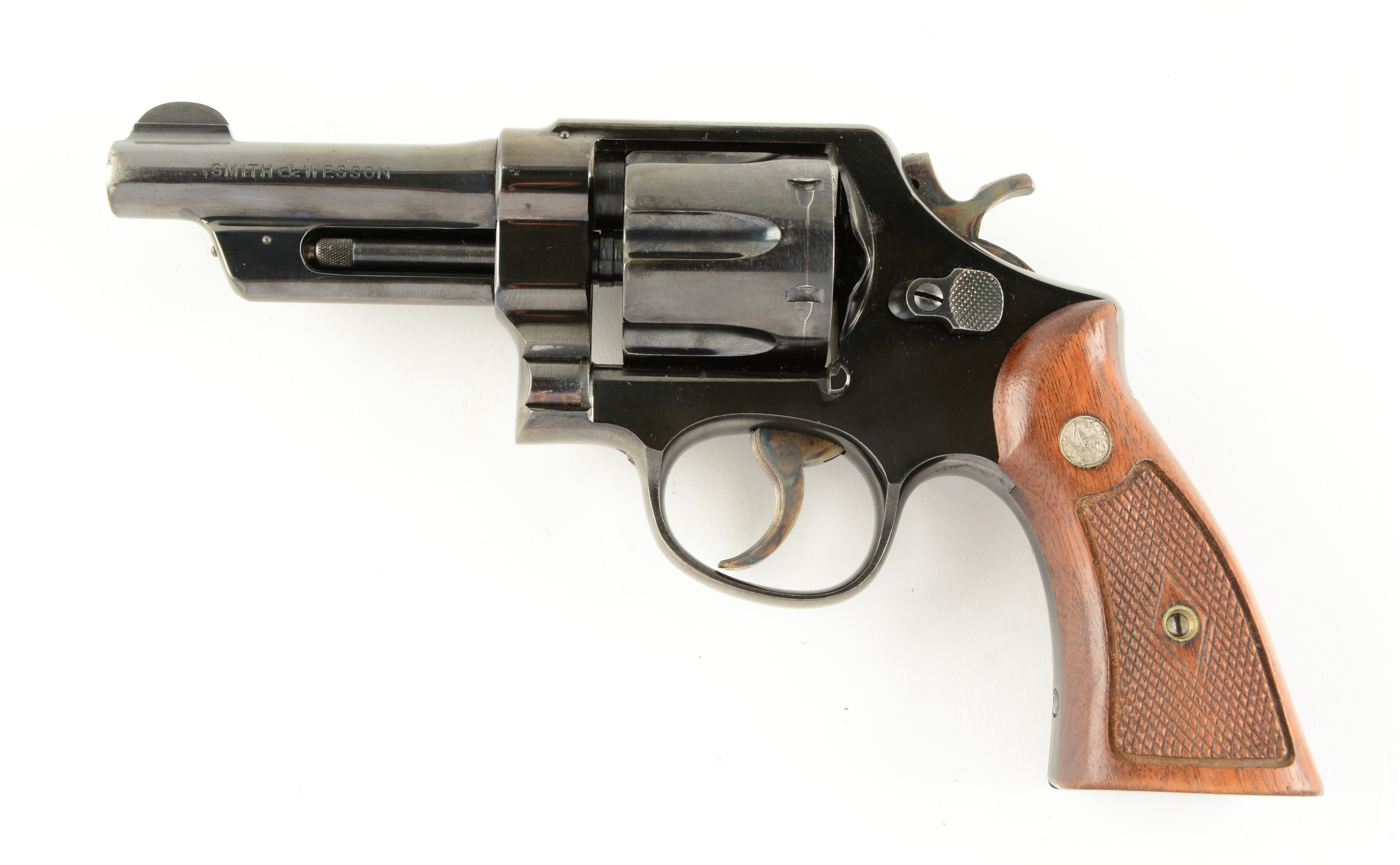 The Victory Revolver was produced during World War II, it is a variation of the Military & Police Model of 1905, fourth change and had the following characteristics between 1942 and 1945:

W.B. - The acceptance mark of Ordnance officer Waldemar Bromberg is located on the butt (to about serial number V145000). Just to the right of the acceptance mark (W.B.) is usually found an ordnance bomb and proof mark. The 'P' proof mark indicates this revolver has passed military proof testing. EXAMPLE – Click Here

U.S. PROPERTY – The property mark was shortened to 'U.S. PROPERTY' at about serial number V300000. At this time the G.H.D acceptance mark was moved from the butt to the left top strap with the property mark. Applied at the S&W factory. EXAMPLE – Click Here

U.S. NAVY – Found on the revolvers left top strap as per the two Navy contracts. The Navy also applied a Property mark on the left side plate on some revolvers; these were filled in with red paint. This is not an S&W applied marking. EXAMPLE – Click Here and Here for the Navy applied mark.

Victory models have also been produced with out property marks, these revolvers were probably delivered by the U.S. Defense Supply Corporation (DSC) to defense contractors and public agencies that required them for guarding war sensitive materials.

P – Proof marking. This can very depending on the contract. Navy marked pistols usually have none. But C.W. Pates books indicate that some delivered under an Army contract could be found with a P mark. Post the V400,000 serial number range they are located on the underside of the barrel, back of the cylinder and left side plate. The later appear to be Army Supply Program contract revolvers. EXAMPLE – Click Here

Victory model 38 Special – 352,000 shipped to the Army and Navy. Some of these were shipped to a commission responsible for supplying the civilian industries. They will usually have no property marks. Uses included guarding factories, ports, and federal/local government agencies.

Note: You can find all kinds of variations, with additional war and post war markings. These include rebuild markings, country ownership markings, unit markings, and much more. For a complete listing see the books referenced below.

The Smith & Wesson Model 686 is a six- or seven-shot double-actionrevolver manufactured by Smith & Wesson and chambered for the .357 Magnumcartridge; it will also chamber and fire .38 Special cartridges. Smith & Wesson introduced the Model 686 in 1981. It is the stainless steel version of the Model 586, which featured a blued steel finish. They are available ported and unported with a choice of 6- or 7-round cylinders.[1]

The 686 has been made with pistol grips having a squared or rounded end (colloquially, 'square butt' or 'round butt'). The grips on the pistol can be changed, and multiple after-market options are available. 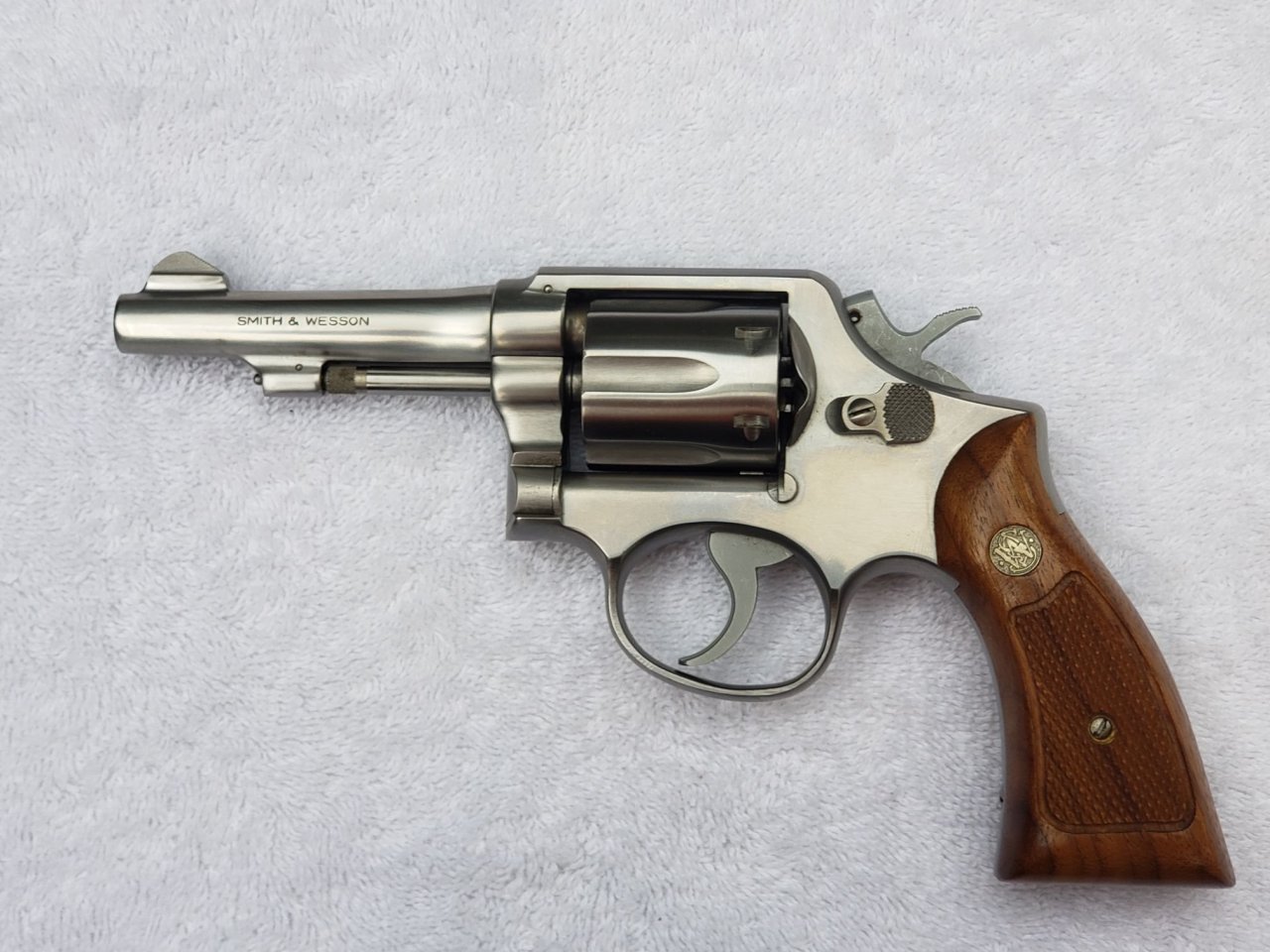 Photo of a Smith & Wesson 686 firing a .38 Special round, taken with an ultra high-speed flash (air-gap flash)

In 1987, seven years after the release of the Model 686, there were reports of cylinder binding with some types of standard .357 Magnum ammunition for L-frame revolvers manufactured before August 1987. S&W put out a product warning and authorized a no-charge upgrade to make modifications to the revolver. All recalled and reworked guns were stamped with an M marking, signifying that they had been recalled and fixed; thus it is known as the M modification for all 686, 686-1, 586-1, and 586-2 revolvers.[7]

Back in 1899, Smith & Wesson introduced the .38 Military & Police revolver, commonly called the .38 M&P. The revolver … Continued

Back in 1899, Smith & Wesson introduced the .38 Military & Police revolver, commonly called the .38 M&P. The revolver and cartridge were both new innovations of Smith & Wesson and immediately became one of the most-popular revolvers of the 20th century. Over six million have been manufactured, and they are still in production to this day.

The .38 M&P was not only the most popular revolver of the last century, it was also the foundation for what would later become the .357 Magnum revolver in 1935. In 1940 the revolver in its Victory Model configuration saved Smith & Wesson from bankruptcy.

The revolver and its cartridge, the venerable .38 Special, were designed to answer a need by the U.S. military for greater stopping power than the then-used .38 Long Colt. S&W set about designing a cartridge with a bullet that weighed 158 grains and had enough power to be 300 fps faster and deliver 100 foot pounds of energy more than the .38 Long Colt. The resulting cartridge, the .38 Special, is one of the most-popular revolver cartridges of all time.

Initial contracts from the U.S. Army and Navy for 3,000 or so new model .38 Specials were received in 1899 and 1900, and soon the revolver was on its way to iconic status. It was Smith & Wesson’s first revolver with a swing-out cylinder that had a cylinder release latch on the left side of the frame. The spent cartridges could be simultaneously ejected by pushing on the cylinder rod, allowing the shooter to reload quickly. The transition from blackpowder propellant to smokeless powder gave the new cartridge the much-needed stopping power that the military had hoped for. (It was not long, however, before the .38 Special would be considered “light,” and the need for greater “stopping power” continues to this day.)

The revolver was manufactured in barrel length, from 2 to 6.5 inches, with both round and square-butt versions. It had fixed sights and was soon the most desired sidearm of police forces throughout the country. In addition to being purchased by our own Army and Navy, as well as by police departments across the nation, military and police units in no less than 30 other countries bought the revolver.

The .38 M&P underwent numerous mechanical changes over the years in an effort to upgrade the cylinder locking system. There were numerous hammer safety improvements as well.

By 1940, however, Smith & Wesson’s fortunes began to wane. The company was under serious financial hardship and close to folding. An advance of one million dollars from the British Purchasing Commission for a new sub-machine gun seemed to be the light at the end of the tunnel for Smith & Wesson. The resulting S&W Light Rifle in 9mm was a well-made and beautiful sub-machine gun that resembled the German MP-38. It had a unique ejection port for spent casings that fell straight down from the magazine well. It was a masterpiece of over engineering and pre-war craftsmanship, which doomed it before one shot could be fired. So well tuned was the mechanism that it failed to cycle when used with standard European 9mm ammunition. The British Military condemned the gun and asked for their money back as per the terms of the contract.

Smith & Wesson didn’t have the money to repay the British, and in an incident similar to one played out at the Robbins & Lawrence factory 90 years prior over the P-1853 Enfield rifle, it appeared that the British would assume control of Smith & Wesson and its assets.

At the last minute, Smith & Wesson offered to supply the British with enough revolvers to offset the one million dollars that was owed. Chambering the .38 M&P in the British .38/200 cartridge saved S&W, because this new revolver was not only popular with the British and Commonwealth forces, but when it was chambered back into .38 Special, it became a sidearm the U.S. military bought and used during World War II as well.

This military version was called the Victory Model, and the serial numbers all began with the letter V. (After a hammer safety upgrade, the serial numbers began with SV.) Over 500,000 were manufactured during the war. The Victory model was made with a parkerized finish and had smooth grips and a lanyard loop, as opposed to the bright blued or nickel finish and checkered grips its civilian predecessor sported.

The production saved the fortunes of Smith & Wesson and contributed to its initial post-war success, as police units in liberated Europe were keen to have a solid and practical revolver tested and proven in battle.

In 1957, Smith & Wesson renamed the revolver the Model 10, a name that it bears to this day. It is still in production as part of Smith & Wesson’s Classics lineup and is offered at $739.

The revolver is still a steadfast sidearm for many police departments, and was used by U.S. military forces as recently as 1991 during Operation Desert Storm in Iraq. And, of course, who can forget its iconic presence in over 100 films, from “King Kong” in 1933 to “The Bourne Legacy” in 2012?

The .38 M&P has an important place in the history of 20th century firearms development, which is why it intrigues collectors and shooters to this day.